I have many memories of the people – Fred Fussell, the Crafts Director and his wife Cathy introduced us to soul food (collard greens were great when prepared with enough grease from the pork fat, but just say "no" to the rutabagas!) We also used to laugh at each other's accents (although WE didn't have any!) Fred and Cathy were the resident historians and Cathy led many a school group through the village, answering a million questions, I'm sure. We became good friends and they are the only folks we still have any contact with. Hi Fred and Cathy! 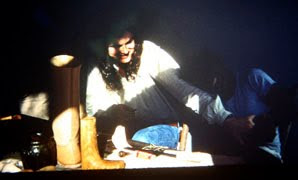 Richard Fox was the young long-haired shoe maker who made us both a pair of shoes. He and his wife, Carmen, once woke us up in the middle of the night so we could see a few snow flurries, a rarity in those parts – we Kansans were not impressed. 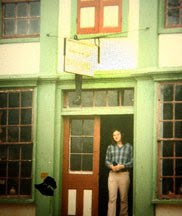 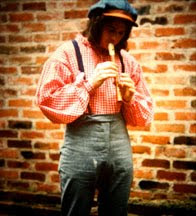 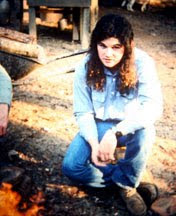 Mr. Blankenship was the resident wookworker and at one point, Dr. Mahan decided I needed to go work with him to learn the cooper's art. While I hated to leave the pottery, I did enjoy learning to make buckets and tubs of cedar. Before returning to the pottery, I actually made several (nearly) water tight containers. 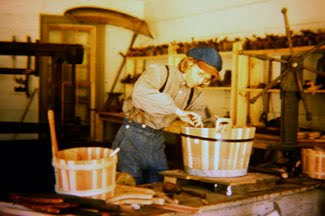 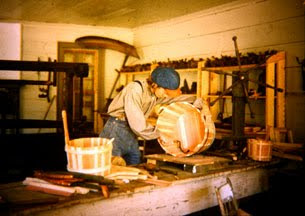 Mr. Blankenship was also responsible for a hobby I've practiced for 35 years now. He made my first mountain dulcimer. I had never seen or heard a dulcimer before going to Georgia, but was intrigued by their sweet, simple tone. 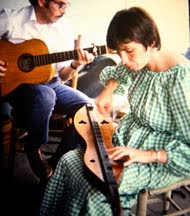 One afternoon, I was walking up the hill to the parking lot after work and Mr. B, driving by in his pickup, asked me if I wanted a lift. As I opened the door to climb in, he moved a short 2x6 over to make room. “I'm going to make a dulcimer out of this,” he said, “it's poplar wood, but see that dark purple streak in the grain? Thought it would be pretty.” The next time I saw him, he showed me a beautiful instrument, a large hour glass shaped, traditional 3 string dulcimer. He had carved the sound holes and whittled the tuning pegs with his pocket knife. And yes, streaked through the back was that dark purple grain. I didn't know anything about playing it, but I ended up buying it from him. We drove to his house and he gave me a little demonstration on playing it. I'm still playing, although I have at least 5 dulcimers now. Mr. Blankenship's slightly crude model, now retired, hangs proudly on the wall.

The locals added a lot of color (no pun intended)! Oliver Powell , Idus Freeman, and Johnny Hudson were general farm hands and maintenance workers, as I recall. The old school bus-turned-flatbed was very out of character in the 1850 village, but early mornings or after hours they could often be seen groaning up a hill with an arm load of firewood or other cargo in tow. 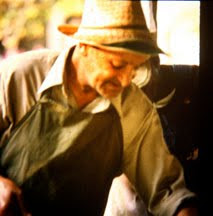 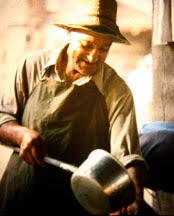 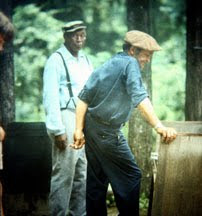 The blacksmith shop was one of my favorite places. Dude Redding was the short blacksmith. He had forearms of sinewy steel. 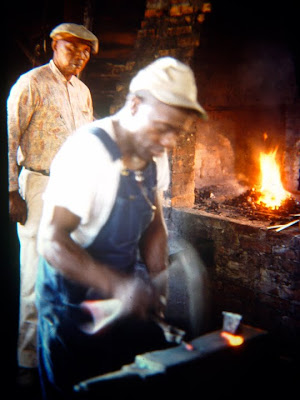 He always had a tin can of boiled (pronounced “balled”) peanuts sitting by the forge. The water turned black from the soot on his fingers. Gross. He was hard to understand, but we discovered when Jane went down to have him make some curtain rods for her house that he couldn't understand her either! I acted as interpreter for that interaction. Jane and I eventually learned a little blacksmithing ourselves – we still use a fire poker Jane made which had two hammer welds! (Impressive, no?) And I forged the metal parts of the potter's wheel I still use. I can still smell the hot iron and coal.

There was also a young man who started working in the blacksmith shop while we were there. His name was Fred Rembert. We became friends with Fred and when Jane's sister visited Westville in 2007, Fred was still working there and was the only person who remembered us! 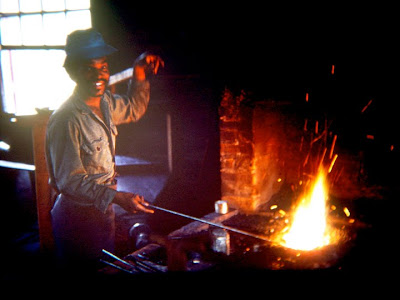 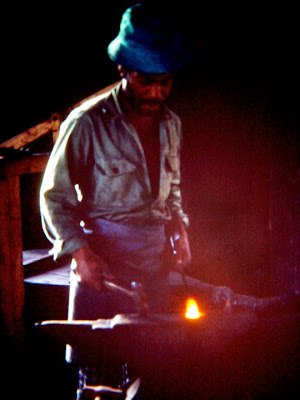 We bought several white oak baskets from Gus Daniel the basket maker, who actually still made baskets for a living when he wasn't working at Westville. They are very large and extremely sturdy baskets once used to haul cotton. Lucius Robinson also made baskets.

Viola Walker, Bernell Randall and Mary Eva Ward worked in the farmhouse kitchen cooking gingerbread, collards and other delicious southern fare and were always quick to share. Mary Eva also worked at the McDonald House when Jane had off. Here Mary Eva is pictured with our Texas friend, Gary Craig Hart. 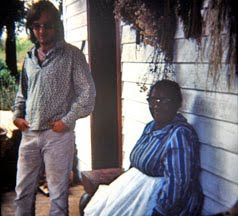 At one point, DX and I were given the task of training two young calves to pull an ox cart. DX made a small double yoke and started teaching them to work together and follow voice commands. 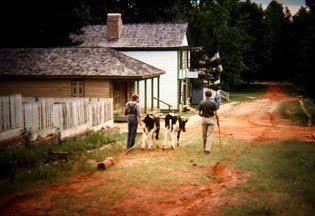 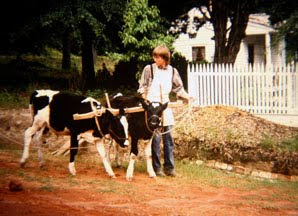 Eventually, I actually got them to pull me around in a little two wheeled cart. Great fun! Here I'm giving my younger brother, Brian a ride with our dog LP. I see one of the puppies wanted to go too. 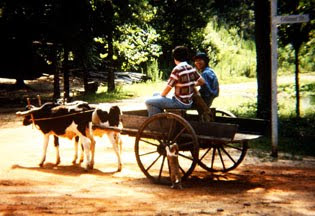 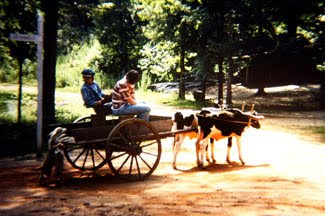 We even hooked them up to the pugmill once to see how they would do. I think we went back to the mule! 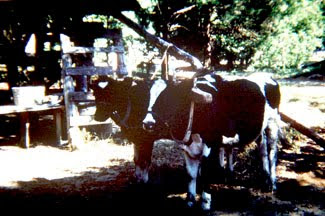 During one of the festivals, feeling rather confident, I decided to take them down the road to the "camp meeting" pavillion. Buck and Ball had other ideas and decided to run back to the farmhouse despite my "impassioned" commands. All I could do was hang on! I was embarrassed by the insubordination in front of so many people and all three of us were glad when that day was over.

Our experiences at Westville are fondly etched in our memories. We learned to love history and especially to appreciate early American stoneware. Many evidences of that appreciation can be seen in our work today, some 35 years later. DX Gordy was an inspiration and a treasure. I'm honored to have known him and to have the opportunity to learn from him. Though short in duration, from 1974 through 1975, our time at Westville, GA was a major influence in our personal and professional lives. 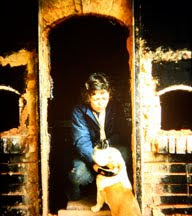 A rare shot of Jane on the potter's wheel! She never cared for the treadle wheels. 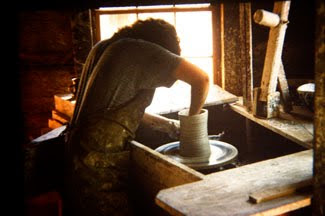 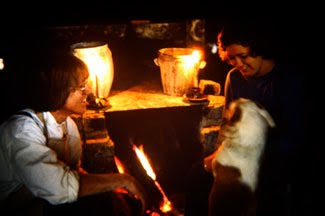 I hope you've enjoyed this walk down the primrose path. Smell the sweet honeysuckle and listen to the lonesome whip-poor-wills ... 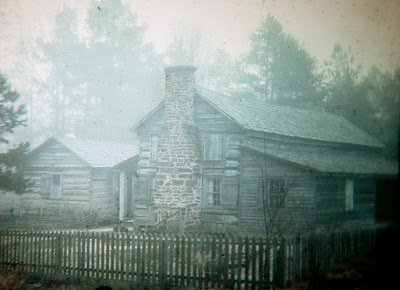