Down the Primrose Path - Memories of Westville - Pt.1 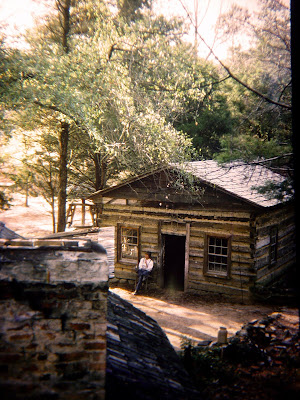 We were sitting in the warm Georgia night watching the fire breathe. Whip-o-wills called in the woods. The sweet smell of honeysuckle was delicious. The only light was from the tongues of fire as they licked in and out of the fire boxes of the wood burning kiln. It was late and would go all night as we watched and fed the insatiable inferno.

My friend Harold and I had gone to visit a potter in an 1850 living history village and help him with a wood firing. An adventure, I guess. An experience, I assumed. Little did I know it would become part of my journey to where I was headed. 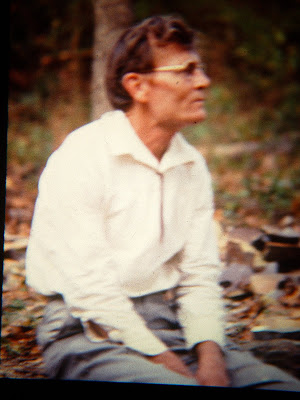 Doris Xerxes (DX) Gordy was from a well known family of potters in Georgia and had been hired by Westville Historic Handicrafts to set up a traditional potter's shop in the village, with foot-treadled wheels, a mule powered pug mill and brick mill, and a wood burning groundhog kiln. The kiln was so named because it was built into the side of a hill, open on the front with the chimney coming out of the top of the hill at the other end. It resembled a root cellar when empty – about 6 feet tall inside and 14 feet deep from the firebox to the chimney. It took about 24 hours and a small mountain of wood to reach temperature, which D.X. determined with an experienced gaze through the stoke holes into the flames within. Salt was shoveled into the fire near peak temperature to vaporize and coat all exposed clay surfaces with the characteristic orange-peel texture of traditional salt glazed stoneware. The interior brick surfaces of the kiln were also heavily coated with a thick buildup of dark green glass from numerous firings. This green goo would slowly drip in the heat of the fire like cold molasses, occasionally adorning a unsuspecting jug or jar below with a emerald drop. 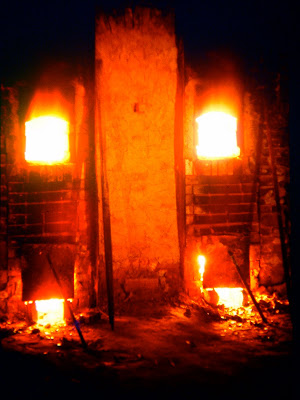 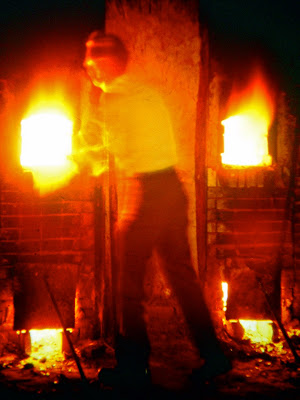 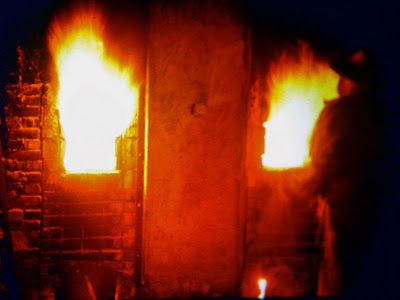 Watching the fire build was magical. The color gradually changed inside the dank cavern as the temperature climbed. First came a dull red glow which intensified to a bright cherry red. Red gave way to orange, then yellow making you want to squint to peer inside. But as it increased to near white heat, there was the sense of power you didn't want to toy with, and the radiation penetrating through clothes and skin said “keep your distance!” There was a silent roar as the fire demanded more oxygen, more fuel, more oxygen, more fuel, in the rhythmic, almost hypnotic respiration of a fire breathing dragon. All the while, the skillful eye of the master potter told us when to offer more wood, when to wait, when to salt.